Get Over Comparing Yourself to Others

How many of us spend several minutes each day comparing ourselves to other people? How many of us have fallen into the trap of trying to twist our personality into being something that we're not? Did you know that not only is the "disease" of comparison foolish it is also sinful?

The symptoms that accompany this disease are an uneasiness in your spirit, feeling guilty about something but you're not sure what, knots in your stomach, discontent, and a general sense of despair. Maybe these feelings hit you only occasionally, or you may indeed find yourself continually consumed with comparing yourself to others and then not being satisfied with who you are.

There is a man in the Bible who knew that he had to be himself and not try to be someone else. I find his story a wonderful source of encouragement to me, and it helps to pull me out of that wrong thinking of comparing myself to others or trying to be like others. You'll find the story in 1 Samuel 17.

It's the story of David, the shepherd boy, who volunteered to go up against the giant, Goliath. Nobody else in the entire Israelite army had been willing to face this giant, even tthe most experienced fighters. They took one look at Goliath and the comparison convicned them it would be foolhardy to try to defeat such a large enemy.

David heard that Goliath was making threats against the Israelite army and he couldn't understand why no one had taken up Goliath's challenge. Now his brother Eliab became very angry with David's questions and he belittled and insulted him. David did not let his brother bother him- instead he volunteered to fight Goliath himself!

When King Saul heard about David's willingness to fight Goliath he tried to give David his own tunic, armor, and bronze helmet. David tried walking around with all the armor on, but because he wasn't used to them he could not do it. Instead  he said "'I cannot go in these', he said to Saul, 'because I am not used to them.' So he took them off." (1 Samuel 17:38-40) Instead, David used his own shepherd bag, five smooth stones and his own sling to defeat Goliath.

How did he do it? How did David defeat Goliath? By using his own slingshot. That's what he was good at; that's the gift God had given him and taught him to use. David was smart enough to relize that he would make a huge mistake to try to do what God wanted him to do in someone else's armor.

How are you using your own unique gifts that God had given you?
Posted by Mary Lowman, Founder of The Christian Working Woman at 3:30 PM No comments:

Have you ever wondered what it would be like to experience the sights, sounds, and landscapes of the country where Jesus once walked? To walk in Jesus' footsteps throughout the Holy Land? Well wonder no more! You have the chance to join Mary and Rex Lowman along with their dear friends, Dámaris and Rod Carbaugh on Mary's 18th trip to Israel.
The trip promises to be be an unbelievable adventure. We will walk in the Land of Jesus while hearing and being blessed with Dámaris's musical ministry and Mary's teachings. Husbands are welcome to come this year as Mary's husband, Rex Lowman, and Dámaris's husband Rod Carbaugh are coming. This truly is the year to come!
You will be inspired and strengthened in your spiritual journey as you visit the sites on our itinerary. There is simply no other place in the world like Israel, and I believe it will be life-changing for you as it always is for me. Trust me—your Bible comes alive!
If you have any questions or concerns, call or email Mary personally and she'll be glad to answer your questions. Make your plans now and join me! You’ll never regret this investment in your spiritual life.
Be sure to check out Dámaris's website and her description of the Israel trip and visit The Christian Working Woman for more details and pricing.
Check out some of our photos from previous trips to Israel! 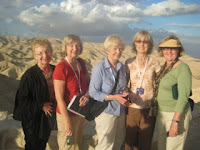 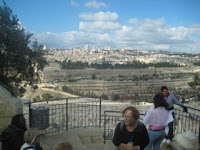 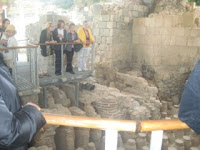 Posted by Mary Lowman, Founder of The Christian Working Woman at 10:50 AM No comments:

Get Over Hurt Feelings

Get over it!
These words aren't soft, gentle, warm or fuzzy. These words seem to lack compassion and mercy. Although they may sound abrupt and very simplistic often times these are the exact three words that we need to hear and heed quite often. If we don't heed those three words we may find ourselves falling increasingly into all kinds of joy-robbing thought patterns and unhealthy habits.

Like a pig to a mudhole, we keep going back to a place that gets us dirty, makes us unsightly and smelly, and keeps us from moving forward to the good things God has for us. Isaiah 43:18-19 is a passage of great hope:


How often we miss the new thing that springs up because we can't get over something from our past. It could be the distant past or what happened five minutes ago, but these things become the mudholes of our lives where we wallow on a daily basis and never find the way in the desert and the streams in the wasteland.

Why do we hang on to hurt feelings so long, thereby heaping unhappiness on our heads? We certainly don't get any revenge on our offenders by hanging on to hurt feelings? If you think that a pity party will relieve some of your hurt, think again! The more you feel sorry for yourself and harbor those hurt feelings, the more you will try to find comfort in your self-pity. It can be a vicious cycle, and, of course, only makes matters worse.

So this week try and let go of some of the hurt that you've been harboring. Make an effort to just
Get over it!
Posted by Mary Lowman, Founder of The Christian Working Woman at 3:30 PM No comments:

Marsha is a Christian woman I admire who was faced with an uncontrollable situation–a workaholic husband.  She had tried through many years of marriage to Scott to get him to break his bad workaholic habits, but to no avail. Finally Marsha came to the conclusion that she could not control Scott; she could not force him to change; she could not make him listen to her.

At that point Marsha had a decision to make: Become a nag, or leave Scott and ruin both of their ministries, or control what she could control and find her fulfillment in legitimate ways apart from her husband, since he was rarely there for her and was completely occupied with his activities.  Marsha made a decision not to abandon her marriage or her family but to control what she could control–herself.

Eventually Scott became aware that Marsha was finding fulfillment in other activities. When he said to her, “You are no longer delighting in me, “ she was able to gently point out to him that it was true; she was finding fulfillment in areas where he was not involved, but only because she had not been able to convince him that his workaholism was a problem. With Marsha’s loving help, Scott was then able to see her point. He began a project to overcome his workaholic habits, and now he has dramatically changed that situation.

I was impressed and challenged with Marsha’s approach to her problem. She could have handled it in a very destructive way, but instead she chose to control that which was in her power to control–herself–and not waste any more time or energy trying to control what she could not control–her husband. But Marsha did it in such a loving, nonselfish way that eventually she was able to help Scott see his problem, and then he was willing to control what he could control–his workaholic tendencies.

I read something recently that really caught my attention: If you can control the controllable, you can cope with the uncontrollable. I started to think about that and realized how true it is.


Don’t you think we often spend a lot of time and energy fretting about things that are beyond our control? We try our best to control those uncontrollable people or things, manipulating here and there, discovering in frustration that our efforts are futile. Thriving, not just surviving depends in great measure on our ability to focus on the controllable and learn to let go of the uncontrollable.
Posted by Mary Lowman, Founder of The Christian Working Woman at 12:17 PM 2 comments: