For a Christian, I think the best definition of a triviality is anything that has no eternal significance. Now, there's no way to completely rid our lives of trivialities. We have to brush our teeth and make coffee, chit-chat with friends and co-workers, get the mail and take the clothes to the cleaners, for example. hey are trivial, but they are a large part of our everyday lives.

However, some people are tormented by trivialities. They fret and fuss about those things which have no eternal significance, and are easily upset if something trivial goes wrong.

If the trivialities of life get to you too easily, ask God to make you aware of what is trivial and what is not. When I catch myself becoming upset or consumed by some triviality, I ask myself, "Mary, what difference will this make in twenty-four hours?" I find that a great majority of those trivialities which are tormenting me at the moment won't make a bit of difference tomorrow. This really helps me to recognize trivialities quickly so I can laugh at them, turn them over to the Lord and forget them.

As believers we have the unbelievable ability to turn trivialities into eternal happenings. How?  Use those short conversations to give someone a pat on the shoulder, a word of encouragement, a small compliment. While you're doing those trivial duties, sing songs to encourage yourself, memorize Scripture, listen to good music. When you're driving along with your family, turn the conversation to wholesome and encouraging topics. These kinds of things transform otherwise trivial, insignificant moments and duties into eternally significant moments.

And whatever you do, whether in word or deed, do it all in the name of the Lord Jesus, giving thanks to God the Father through him.


Colossians 3:17
Posted by Mary Lowman, Founder of The Christian Working Woman at 9:00 AM No comments:

A young boy was reading a thrilling mystery book when his mom insisted he put the book down and do his chores. "But, mom, I'm in the fourth chapter and the villain has the hero in his clutches. Looks like he's going to die! I can't quit now." But mom insisted so hurriedly he flips to the last chapter and reads the final page. He then bounds into the kitchen where his mother is waiting and says, "Wow, that old villain is doing real good in Chapter 4, but just wait till he gets to the end of the book. Is he in for a surprise."  It looked liked disaster in Chapter 4, but when you know the end, then Chapter 4 takes on a whole new perspective.

You go to a job where God is irrelevant to the people around you. Where his name is used only in profanity, and they seemingly give no thought to God as Creator, Ruler, or Sovereign. You're in a daily environment where a commitment to Jesus Christ is looked upon as foolish, naive, laughable. When you apply biblical principles in your everyday world, people take advantage of you, ignore you, or discount your ideas altogether.

You're walking the straight and narrow, but what for? Where does it get you? The other team does what they please, and get ahead for it.

I want to encourage you to remember one thing:  The final chapter has been written, and we know what the end will be. Maybe you're in Chapter 4 t­oday, and you need to flip to the end and read the last page. It's already been written, and I can tell you the outcome:  Jesus wins and those of us who are his followers will win and reign with him. Read Revelations 20, 21, and 22 today.

Remember, God has not lost control of this world. He is bringing it to its end in his time and for his purposes. He is Sovereign and he still reigns in heaven.

I find myself trapped in this human dilemma:  I have a strong drive to accomplish and achieve, but I am not a naturally disciplined person. I am learning a very important lesson:  Lack of discipline is self-inflicted suffering! If I refuse to impose discipline on myself, I will inflict suffering on myself.

What I've also learned is that when I start to lose discipline in one area of my life, it spills over to others. For example, if I let down my discipline and eat all kinds of things today that I know I shouldn't eat, I'm likely to skip the exercise program in the morning, because I'll think, "Well, what's the use of exercising after you ate all that pie yesterday!"

Where is your discipline weak? Is it eating habits, exercise, organization, time management, laziness or procrastination? Choose one—just one—and begin a prayer campaign. Admit to God your weakness when it comes to discipline in that area and ask for strength.

Then design some gimmicks or structures that force the discipline on you. Ask for help; tell people what you're going to do so you can be held accountable. That will help to impose that discipline.  Then, just do it! Start today! You're going to discover that adding discipline to your life is indeed the road to real life. You'll get rid of guilt, feel good about yourself, and know that you're using your gifts, time and energy as God wants you to.

To acquire a disciplined life, you will have to pay a price. But it's a big bargain. Go for it!

He who ignores discipline despises himself, but whoever heeds correction gains understanding.


Proverbs 15:32
Posted by Mary Lowman, Founder of The Christian Working Woman at 9:00 AM No comments:

Suffering in the Workplace

Have you ever suffered in the workplace for doing good ? A friend of mine once refused to falsify some government reports as instructed by his employer and as a result, he lost his job. He was unemployed for quite a few months before finding another job and that caused his family a financial hardship. He suffered for doing good.

I think of another woman who was caught cheating on the books where she worked. She had actually filtered money for herself and it eventually caught up with her. She lost her job, too, but she suffered for doing evil.

Suffering is never enjoyable, whether you’re suffering for doing good or doing evil. But there is a great reward for those who do God’s will, who do the right thing regardless of the personal cost, and suffer for doing so. Peter goes on to tell us “So, then, those who suffer according to God’s will should commit themselves to their faithful Creator and continue to do good” 1 Peter 4:19.

So, if you're suffering slander or malicious treatment on your job, make sure it's for doing good not evil. And if you are suffering for doing good, take joy that you are counted worthy to share in the suffering of Christ, and “continue to do good” regardless of the consequences.

Keep a clear conscience, so that those who speak maliciously against your good behavior in Christ may be ashamed of their slander. It is better, if it is God's will, to suffer for doing good than for doing evil. 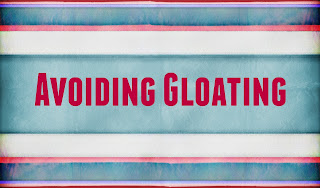 There was a time in my career when I worked for a very difficult man. I spent many unhappy days in that job because of the way he treated me and others. After about a year God revealed to me that I had great malice in my heart toward him.

I certainly had never thought of myself as a malicious person, but there it was all over my heart: dirty, ugly malice. I wanted bad things to happen to him. I dreamed about him making some gigantic mistake and being fired. I wished and hoped he would get his “comeuppance.” That is malice.

Years later after we had both left that company I heard of some stumbles he had made. I guess you could say he got what was coming to him. What goes around comes around, and all that. But, by God’s grace, I had gotten rid of that malice toward him, and I was very saddened to hear that things were not going well for him. It brought no satisfaction or joy to learn that he had stumbled.

We should never gloat over someone else’s misfortune, even if they brought it on themselves. First Corinthians 13 reminds us that Love does not delight in evil but rejoices with the truth 1 Corinthians 13:6. Dig deep in your heart today and see if there is any malice hiding there. If so, get it cleaned out fast and let God’s love fill your heart instead.

Do not gloat when your enemy falls; when he stumbles, do not let your heart rejoice.
Proverbs 24:17
Posted by Mary Lowman, Founder of The Christian Working Woman at 8:00 AM No comments: